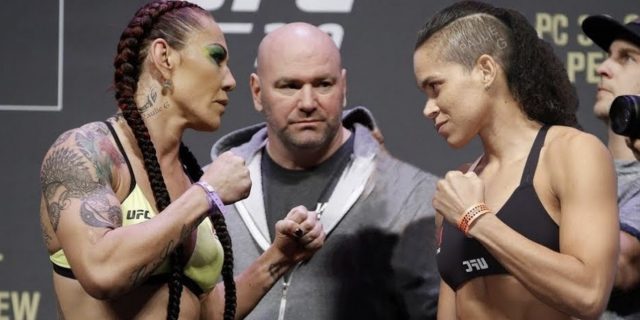 Cris Cyborg vs. Amanda Nunes a potential superfight for UFC 228

A champ vs. champ super fight might be going down later this year.  The UFC promotion has been trying to put together Cyborg vs. Nunes since earlier this year, then it was desired for UFC 226 on July 7 in Las Vegas, but that failed to come to fruition.

But it finally looks like things seem to settle down as the dominant UFC women’s featherweight champion Cris Cyborg revealed on Twitter that she agrees to a fight against women’s bantamweight champion Amanda Nunes at UFC 228.

“My last fight was four months ago,” Cyborg wrote. “I’m ready to fight.”

I agreed for second time , fight Amanda Nunes September 8 #UFCdallas#UFC228 my last fight was 4 months ago. I’m ready to fight.

Let’s go @Amanda_Leoa you called me out now you have to handle it!

In her third tweet, Cyborg reiterated Amanda Nunes’s initial desire to fight fellow Brazilian. After two failed PPV attempts, Cyborg got an itch to return to the octagon.

Nunes also agreed to fight Cyborg in her Tweet and even sign the contract but not for UFC 228, but at UFC 232:

Amanda Nunes is coming off a fifth-round TKO win over Raquel Pennington at UFC 224 back in May. She also holds wins over Valentina Shevchenko and Ronda Rousey, since her title victory over Miesha Tate at UFC 200 in 2016.

Cyborg vs. Nunes it’s not a done deal yet, but both agree to fight each other. Now UFC needs to make it official, let’s do it, Dana White.

UFC 228 is set to take place at American Airlines Center in Dallas on Sept. 8, currently booked a featherweight showdown between Yair Rodriguez and Zabit Magomedsharipov.