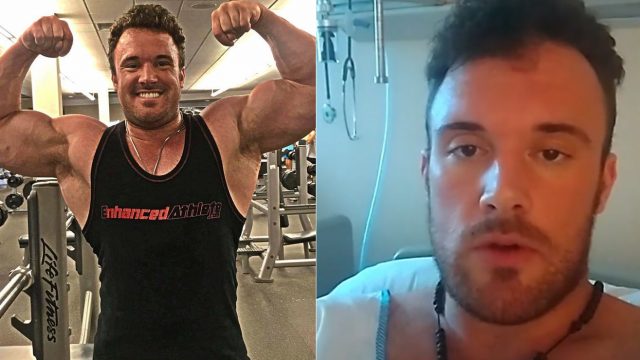 Daniel Marquis fights for his leg because of “Infected Gear”!

Thousands of bodybuilders worldwide use steroids and there’s no secret there. However, an American bodybuilder who lives in Thailand almost lost a leg from a shot of “infected gear” (Steroids). Daniel Marquis, a California native posted his limb-threatening circumstances on Instagram.

Be warned that the following photos are extremely graphic…

Marquis reached out to anyone who would be willing to donate so that he could keep his leg after developing Necrosis, which stops the blood supply to cells and organs. This will pretty much cause flesh to die and spread until there’s nothing left.

The bodybuilder, essentially fighting for his “life,” explained that he was in Colombia alone with no health insurance. He went bankrupt after spending 10,000 dollars on a surgery which failed and reached out via social media in an effort to raise enough money for the remaining, required surgeries.

After the first surgery, the incision opened up which caused new necrotic dying flesh to spread in his leg. This was when time starting really ticking for Daniel Marquis to get his second surgery and he reached out in desperation…

“In this time of incredible physical and emotional suffering and donation no matter how small to help me to afford my upcoming surgeries to save my leg is something I will be eternally grateful for.”

Marquis set up a GoFundMe Account and thankfully raised over 18,000 dollars of his 30,000 dollar goal so that he could have the remaining surgeries. The second surgery was a success and he decided to suspend the rest of the donations due to a positive prognosis.

Injecting steroids can carry a ton of life-altering risks so it’s advised to understand the possible consequences of negligent use. These kinds of mistakes which can change your life for the worse are avoidable if due diligence and precautions are taken.  Injecting compounds into your body is a serious matter and unfortunately, many people are unaware of the severity of improper use.

It was a close call for Daniel Marquis and although all is not said and done quite yet, we hope the near future for him favors health and proper recovery from such a devastating occurrence. If you’d like to follow Daniel Marquis’ story, you can do so on Instagram at @bodybuilderinthailand.

For the latest news and updates please follow us on Instagram, Facebook and Twitter.
Matthew Magnante is freelance writer who specializes in all things fitness. He has had a passion for fitness since elementary school and continues to research and learn how to build muscle effectively through training and diet. He also loves to help others to achieve their fitness goals and spread the knowledge where needed. Matthew’s other passions include learning about mindfulness, strolling through nature and having meaningful conversations about life.

5 Tips To Stay Motivated Throughout Your Bodybuilding Journey

Weight Training Changed My Life. Here Are Benefits Of Weight Lifting For Women

Will I Get Bulky With Weight Training? …And Other Dancer Concerns

5 Tips To Stay Motivated Throughout Your Bodybuilding Journey